After a (relatively) quiet new year the PaxEx world kicks off 2020 with a bang this week. At CES in Las Vegas we'll hear plenty from component suppliers and integrators about what might change the markets. Alas, very few of the aviation-related concepts unveiled at the show make a quick move into production. Still, it is fun to dream...

Some airlines cutting Baghdad service due to safety concerns

Following the assassination of Qassem Soleimani near the Baghdad Airport in Iraq on 3 January 2020 the security of the city and the airport remains in question. As a result some commercial airlines made the decision to halt flights. The impact thus far is limited, but could shift as other airlines assess the implications.

Transitioning the fleet from props to jets could change the tourism and business landscape for the tiny (population) but far-flung islands nation of Kiribati. With a pair of E190-E2 due - and the first one just delivered - to the national airline things are looking up. 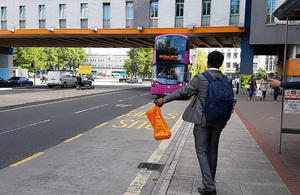 Yes, buses. But also a strong push by government into technology and modernizing the travel planning experience. With real-time data passengers become better informed and better able to adjust. Nice to see better investments in the "last mile" of the journey coming along.

Take an aircraft out of service and pore over every detail of its design and there's a decent chance some flaws will show up. Which is bad news for Boeing right now as a tail control wiring issue may now require mitigation before the FAA will recertify the type.

When good planes have to die: Scrapping an A380 and Lineage 1000E

Why scrap a perfectly good airplane? Whether an extremely large or reasonably small aircraft, the reasoning often is the same: Money. Images from the past couple weeks showing an A380 and Embraer Legacy 1000 headed to die raised questions and emotions about just how well the process works.

What Happens When an Airline Opens a Restaurant?

Call it the ultimate ancillary revenue push. Getting passengers to eat airline food willingly on the ground would be a massive shift and AirAsia has some of the better food in the sky to start with. But the early reviews for its inaugural Santan restaurant in Kuala Lumpur are not all great.

Vistara is making a bid to be the first Indian airline with inflight connectivity installed. The carrier is reportedly partnering with Nelco, a local satellite services provider, to bring the service online. Neither party is confirming the deal, though Indian regulators confirmed that applications were processed and permits issued.